The Portland-based quartet present stunning indie rock originals and covers, early jazz and jazz standards, reinventions of ‘70s and ’80s rock as ballads, classical art songs mixed with rock (yes, really), and other surprises from far and wide. If the spectrum sounds broad, it is all held together by a signature sound informed by classical training and a respectful blending of many genres. It’s like a warm conversation with a good friend . An evening with Kate & The Crocodiles has been called “A perfect combination of musical talent and intimate, unforgettable entertainment.” 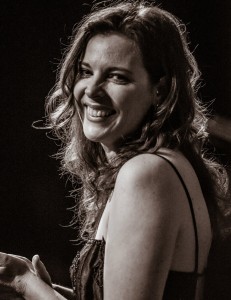 Born in Kansas City, Missouri, Kate began vocal training during junior high school, studying throughout high school and college in the Pacific Northwest. Performing in competitions for classical vocal music, she placed among the top vocalists in the State of Oregon and won many awards, including the coveted National Arion Award for Music. After living in Walla Walla, WA, for more than 20 years, she moved to Portland, OR, and co-founded Kate & The Crocodiles. She performs shows with small groups and has been an invited guest soloist with myriad groups, most recently including Pink Martini. She is also a freelance graphic artist and teaches Ukulele at Montavilla Guitar Studio. (Photo credit: Scott Butner) 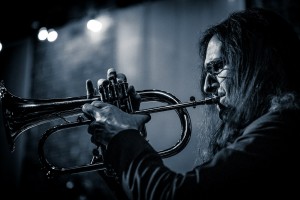 Gavin Bondy
Gavin studied trumpet, piano, and voice as a young person in Portland, Oregon. Years later he began to quietly prove he could make a living as a freelance musician in the city of Portland.  He played trumpet in every imaginable circumstance: wedding ceremonies, musical theater orchestras, foot races, brass quintets, national anthems, and polka, mariachi, salsa, gospel, R&B, funk, pop, and classic rock bands.  Just as he quit his day job in 1996, the audition for Pink Martini presented itself, with whom he has played ever since.  A few years later, Gavin founded and led The Shanghai Woolies, an eight-piece band who play hot jazz and pop from the early 20th, employing electric guitars alongside the clarinet and banjo.  He met Kate in 2013 and began to imagine yet a new direction for his music, one which has inspired him to take up three new middle-brass instruments: alto horn, mellophone and French horn.  (Photo credit: Scott Butner) 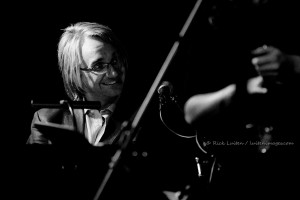 Craig Bidondo
Originally from Alaska, Craig studied piano and music composition in Los Angeles before moving to the Portland area to embark on a career as a soloist and group artist throughout the Northwest, exploring jazz, classical, rock, new age, and gospel music. In 1997 Craig co-wrote the award-winning musical, “Look At Us Now”, and served as the pianist and music director for the Tapestry Theatre production. Later, from 2006 to 2007, Craig directed the music and played keyboards for the Portland production of “Menopause — The Musical” for more than 290 shows, the longest-running production in the history of Portland Center for the Performing Arts. (Photo credit: Rick Luiten) 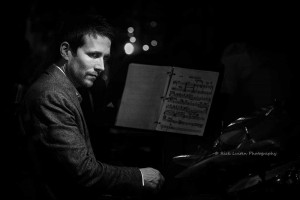 Raised on a farm in Southern Illinois, the first thing Brent Follis can remember is picking up a pair of wooden spoons, and tapping out rhythms on some old popcorn tins. Since then, his journey in music has led him cross country and around the globe, in search of inspiration and culture.  He earned a degree in Advertising and music performance from Southern Illinois University before moving to the Pacific Northwest.  It was in Portland, Oregon, where he befriended Ghanaian master drummer Israel Annoh, who continued to shape Brent’s style and voice on the instrument.  After receiving a call from a friend and musical writing partner on the East Coast, and needing to fulfill his yearning for diversity, culture, and thin crust pizza, he moved to New York City.

After a decade of performing, traveling, and soaking in the vibe of the Big Apple, he made the sojourn back to the Rose City, where he maintains a busy recording and performance schedule, and can be found backing up many talented singer-songwriters, jazz and pop artists.   He believes his role on the drum set is to provide a great feel, uncover the nuances of each song, and create a unique and supportive drum part. (Photo credit: Rick Luiten)